skip to main | skip to sidebar

BACHILLERATO. Essay writing. The stem cell controversy: arguments for and against. 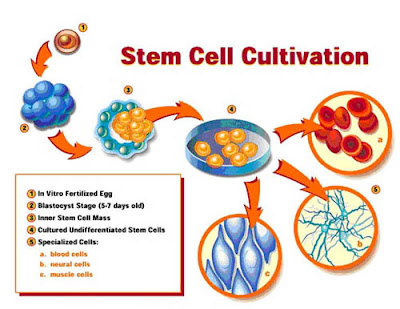 Featuring: WIKIPEDIA ARTICLE on stem cells. A MODEL ESSAY ON

ARGUMENTS FOR AND AGAINST RESEARCH AND THERAPIES USING STEM CELLS.

(ADDING DIFFERENT ANGLES)
However, recently, it has been shown in principle that adult stem cell lines can be manipulated to generate embryonic-like stem cell lines using a single-cell biopsy similar to that used in preimplantation genetic diagnosis that may allow stem cell creation without embryonic destruction.[32] It is not the entire field of stem cell research, but the specific field of human embryonic stem cell research that is at the centre of an ethical debate.

(ARGUMENTS AGAINST)
Opponents of the research argue that embryonic stem cell technologies are a slippery slope to reproductive cloning and can fundamentally devalue human life. Those in the pro-life movement argue that a human embryo is a human life and is therefore entitled to protection.
(ARGUMENTS FOR)
Contrarily, supporters of embryonic stem cell research argue that such research should be pursued because the resultant treatments could have significant medical potential. It is also noted that excess embryos created for in vitro fertilization could be donated with consent and used for the research.
(CONCLUSION)
The ensuing debate has prompted authorities around the world to seek regulatory frameworks and highlighted the fact that stem cell research represents a social and ethical challenge.
Posted by English teachers, IES Consaburum at 11:20 PM